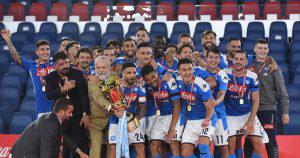 Football continues in various leagues around the world on Sunday, and teams will be looking to end the season on a strong note.

Check out our daily three-fold pick after extensive research and analysis.

Tottenham and Arsenal will clash in a North London derby which will be important to the European aspirations of both clubs.

Jose Mourinho’s men come off the back of a dour stalemate against a poor Bournemouth side which were a far cry from the side that were whitewashed by Manchester United.

Both clubs are separated by two points and a loss for either side will be a huge blow to their challenge for fifth spot, with Arsenal having recovered from two defeats to go four games unbeaten.

The Lily-whites will be fired up for this match as they won’t want to lose their first North London derby in their new stadium, but there are still a few issues in their defence line which Aubameyang and Co. will seek to exploit.

Mikel Arteta’s charges have improved alot in recent weeks, and will pose a serious threat to a Tottenham side that have not truly convinced lately.

The reverse fixture ended in a 2-2 draw, but we predict Arsenal to come out victorious in this match as they are currently the better team based on their form.

An Arsenal win at full time is priced at odds of 2.75 by Bet365. For ambitious punters, it could be worth betting on Arsenal to get a penalty. Seven penalties have been awarded to Arsenal in their last eight matches against Tottenham, so this match to see a penalty is worth a punt, and it is 3.50 odds by the same firm.

This is a must win match for Leganes who are six points behind the safe zone. They are expected to put up a big fight against Valencia, but beating Los Che is easier said than done.

Valencia on the other hand, are fighting for an Europa league place, and they proved their mettle by beating Real Valladolid which was a confidence boosting win.

The host will go for an all-attack set up here, knowing the importance of this match, which will give Valencia the chance to counter, and with players in the ilk of Kevin Gameiro and Maximiliano Gomez, they are capable of doing the damage.

Leganes played out a 0-0 draw against Eibar last time out, with only one shot on target juxtaposing the bluntness of their attack.

They have scored just thrice in their last six fixtures and will need something much more ordinary to overcome Valencia.

However, Valencia have conceded in five of their last six matches, showing a rather fragile defence which had let in eight goals in that time.

Valencia have also not won away from home in the past nine league games, which is a poor run.

The reverse fixture of this game ended in a 1-1 draw earlier this season. With Leganes finding goals hard to come, and Valencia’s attack capable of doing the damage, we predict a slim win for Valencia over Leganes. Valencia to win at full time is priced at 2.38 odds on Bet9ja.

GOALS TO FLOW IN NAPLES

All eyes will turn to the Stadio San Paolo when Napoli take on Ac Milan in the Serie A.

Napoli have recorded back to back wins against Genoa and Roma in the previous two league fixtures, and have been resurgent since the arrival of Gennaro Gattuso.

The Italian will be able to call on the services of Diego Demme and Kalidou Koulibaly who are back from suspension, and his wards should be able to do the damage to Milan.

AC Milan came from behind to beat bitter rivals, Juventus 4-2 during the week and will be confident going into the match. They are eyeing a European ticket, but Napoli will prove too tough for them to handle.

I Giallorossi are on a five match unbeaten run, winning four and drawing two during that run, while scoring fifteen goals in the process. A scoreline of 1-1 was played in the reverse fixture.

With the strong form of both team going into this fixture, we expect a highly entertaining match with a lot of goals to be scored.