Home Betting tips Who will win the Spanish La Liga this season?

Who will win the Spanish La Liga this season? 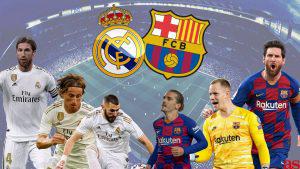 Real Madrid and Barcelona are yet again, set to see their heated rivalry for the Spanish league crown go down the wire, with both sides outrightly the favoured contestants to win the title by almost all African sportsbooks.

Barcelona failed to make the most of their trip to Balaidos on Saturday, and were twice pegged back, including being denied what would have been a big victory by a late freekick by Iago Aspas who struck inside the closing two minutes to hand Celta Vigo a 2-2 draw.

Quique Setién and his side thus face a nervy wait to see what unfolds of the Espanyol versus Real Madrid clash later on Sunday evening, with the stalemate now putting them just a point above their eternal rivals at the summit of the league’s standings.

With barely six round of matches left to play in the Spanish topflight for the season, Real are a cut price of 1.36 by Bet365 to win the title, with defending champions, Barca priced at an enticing 3.00. Yet, there could still be many deciding factors to it, with difficult games still to come for both sides.

Zinedine Zidane and Los Blancos meanwhile, have been in excellent form since returning to league action on June 14, putting four straight wins on the board against the likes of Eibar, Valencia, Real Sociedad and Mallorca. Barca while still unbeaten in their quest to retain the crown have drawn twice in that cycle, beating Sociedad, Mallorca, Leganes and Athletic Club but dropping points against Celta and Sevilla who are a long shot of league triumph at odds of 4501.00.

Neither side particularly boasts of a very kind run-in, with Real still expected to take in rather difficult trips to Bilbao and Granada in the coming weeks while the likes of Villarreal and Getafe will be no pushovers.

Barcelona, on their part, will host Diego Simeone’s Atletico Madrid priced at 1001.00 to win La Liga this Tuesday, a potentially difficult clash which could have its bearing on the title race. After then, the likes of Villarreal and of course Catalan neighbours Espanyol lie in wait. Neither of these fixtures will be easy to negotiate but expect a lot of action and thrills as the season reaches its breaking point.

With both sides having already played between themselves twice in the topflight thus far, there will be no room to make up for lost ground by virtue of a face-off, and so every dropped or gained point matter at this stage. By and large, it promises to be an exciting end to the 2019/2020 Spanish La Liga season, but who eventually wins the ultimate prize is still in the melting pot.

All odds are correct as at the time of this publication. Please gamble responsibly