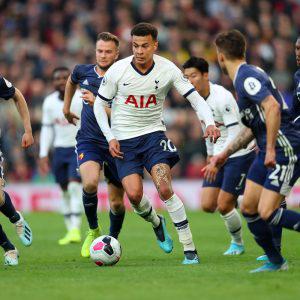 The English Premier League season is gradually coming to an end, and teams will be looking to end on a strong note. There were slip-ups this past game week from Champions league hopefuls, Leicester City and Chelsea, which Manchester United will look to capitalize on when they take on Southampton on monday night.

So, we’ve picked five games which we arrived at after in-depth analysis for accumulation this week which punters can bank on.

Ole Gunar Solskjaer’s men will dare to dream at the Theatre of Dreams when they take on Southampton. Manchester United have started to click in this second half of the season, and especially since the lockdown has been lifted. Right now, their ultimate target would be to qualify for the Champions League.

With the slip up from both Leicester and Chelsea, Manchester United will look to gain momentum by taking the three points at the end of the final whistle.

Taking into consideration Man Utd’s incredible form and their blistering attack, coupled with their good h2h over this opponent, they should have no problem at all seeing them off.

A Manchester United win at full time is priced at 1.28 odds on Bet9ja

Goal rush at the bridge

Frank Lampard’s men had a nightmare outing against Sheffield United in their last match, a result which could have hampered their chances to finish in the top four.

Taking on an already relegated Norwich side who have nothing to play for, expect Norwich to throw caution to wind, and attack Chelsea from the start.

Chelsea will also look to bounce back from that disappointing loss against Sheffield, and they should do so in emphatic style against a Norwich side that have been disappointing to watch for much part of the season.

However, one positive for the Blues would be the fact that Leicester bottled it against Bournemouth and are still lagging one point behind them. Lampard’s men should make the most of this unexpected favour, which can come in the form of no team than the worst of the lot, Norwich.

We expect this game to see more than two goals and over 2.5 is priced at 1.37 odds on Betway.

Goals to be at large supply at the Etihad

Manchester City registered a massive 0-5 win on the road last time out against Brighton. They do not look like stopping their scoring spree any moment and should continue against a somewhat resurgent Bournemouth who beat Leicester 4-1 recently.

Bournemouth will be confident going into this match, and will be thinking of an upset against Manchester City, so we can expect goals from what is poised to be an interesting affair.

Tottenham pipped Arsenal to get the three point on Sunday, and will feel confident as they face Newcastle this week.

As things stand, Jose Mourinho’s men have the upper hand. They were unbeaten in four of the past five overall fixtures, and are fresh off a win against one of the top teams in the league.

And on top of that, the Lily-whites have a great h2h record against this rival over the years. Considering all these factors, expect a win from Tottenham.

Newcastle lost 2-1 on the road the last matchday, against Watford. Both goals they let in were penalties, well dispatched by Troy Deeney.

However, we reckon that Steve Bruce’s men will be determined to put a halt to their struggling run, but we expect the expertise and experience of Mourinho to be an advantage for Tottenham to win this match.

Tottenham to win is priced at 1.77 odds by Betwinner

Liverpool to win at the Emirates

Liverpool have already made sure of the title, and still seem to be in the mood to deliver win after win. In order to break the 100-point record set by Manchester City, the new champions will have to win the remaining three fixtures that comes their way.

Arsenal are surely one of the best teams in the competition, but they really are no match for the champions, at least on current form. Recent form of either squad, as well as recent h2h results suggest a Liverpool win is in the offing this Wednesday.

The Gunners lost 2-1 on the road the last match-day, against arch-rivals Tottenham. In the meantime, the current champions were held to a 1-1 draw at Anfield the past game week, by Burnley.

Consider that the Reds have won the reverse fixture in style, and they are also unbeaten against this rival in the last five years, coupled with the fact that Arsenal have a lot of problems with their defence, expect nothing but a win from Liverpool which is priced at 1.85 odds by Bet365.