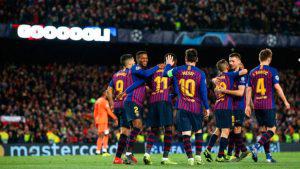 The Spanish La Liga is in its 36th gameweek, and the title may be decided after this round, should Real Madrid win yet again.

We have selected five games for accumulation after in-depth analysis and forecast.

Real Madrid could wrap up the title with one more win here. Right now, they have 83 points from their 36 fixtures, while rivals Barcelona have managed 79 from the same number of games. The maximum Barca could aim for right now is 85 points, while Zinedine Zidane’s men could make it 86 with one more win.

Considering their impressive form, their h2h superiority over Villarreal, and the realization that one more victory would land them the much coveted title, we expect a win from Los Blancos.

Real Madrid are on a nine-game winning run, and have conceded a solitary goal in the past six matches. Keep note that they had also scored two or more goals in six of their last nine clashes. Real Madrid to edge to this important win at full time is priced at 1.43 by Bet9ja

Barcelona is one step away from holding the record for an undefeated league home campaign, and with their defense maintaining a clean sheet in their last five victories as the host, Osasuna will have their work cut out against the Catalan giants.

Barcelona is unbeaten in their last ten matches, with three draws in it. They are on a three-game winning streak in the league, beating Real Valladolid by a lone goal in their last match.

Osasuna have only one win in their recent three fixtures in the league. They come here after a 2-1 win at home against Celta Vigo in their last outing.

The visitors have only two wins in their last six away fixtures in the division. Besides, they have not been successful in any of their visits to Camp Nou since 2009.

With their poor away form and Barcelona resolve to finish their season in the strongest possible firn, Osasuna could be in for trouble at the Camp Nou. Barca to win handicap -1 is priced at 1.40 odds by Bet365.

Considering the great form Atletico Madrid are in, their impressive h2h superiority over this rival in previous clashes, and the struggles of their counterparts – on will expect Atletico Madrid to dominate proceedings at the Coliseum Alfonso Perez.

However, they will have to be careful, taking into account the desperation of the hosts.

On the road, Atletico are on an unbeaten run in eight trips, and their last away loss had in fact came against Real Madrid.

Getafe are currently placed sixth in the table, and in possession of the final direct-entry ticket into the Europa League. With just two games remaining in the season, they have no chance to make it into the Champions League. Their Europa qualification is so far from confirmed yet as well, so expect them to give their all in this match, but as things stand, Simeone’s men are easily the favorites, considering their current form and good h2h record against this opposition. Atletico to win is priced at 2.36 by Betwinner.

Both Teams To Score At Reale Arena

Real Sociedad will yet try to keep their Europa spot intact in the league table, as Athletic Bilbao is beginning to pile pressure on them. With just two round of games left for the season, the tension might have shifted to the Europa spots and this one will be a much anticipated clash.

Sevilla have made it into the Champions League qualifiers after being nine points away from Villarreal in the league table. So, the visitors will presumably approach this game with a reluctant, conservative mood, and will probably give a tough time for the home team.

The luxury of playing at home have not been paying off for La Real and, just one win in the recent five fixtures does not put forward the strongest case for home comfort here.

Sevilla have been unbeaten for 13 straight matches, with six draws recorded therein. They are currently on a four-game winning streak, and brushed past Mallorca 2-0 in their last outing. Thus, the BTTS tip with 1.75 odds by 1xbet will come in handy for the punters here.

Espanyol have been demoted to the Segunda Liga for next season after being the first team to be mathematically relegated.

The visitors have been the whipping boys for other teams to the end and are most likely to be defeated again here.

Espanyol is on a seven-game losing streak in the campaign, following a 0-2 loss at home against Eibar in their last league outing. They have scored in only three of their last ten games.

In contrast, Valencia are known for their strength at home and it doesn’t look like Espanyol will be a match for them here.

The Budgerigars have not had the best of campaign, and will now face up to life in the second tier next season. Their overall form had continued to worsen, and there is no case of picking up points about their form on the road. So, the home win in full-time with 1.57 odds on Betway will be the best bet for the punters in the clash.