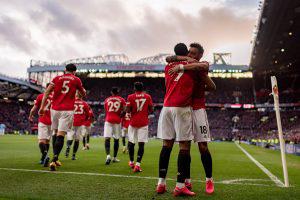 As usual, we have picked matches from across the world, that punters can bank on for Thursday here. We just hope each of these three oblige!

Manchester United missed out on a great opportunity to climb to third in the past game week following their draw with Southampton after Leicester City and Chelsea both slipped up.

Their incredible winning streak was also put to an end by Michael Obafemi’s last gasp equaliser, and to further pile pressure on them, the ban on City by UEFA was lifted as well.

Now, Ole Gunnar Solskjaer’s men will have to finish fourth or better in order to qualify for the Champions League. With just three fixtures remaining, it might seem like a Herculean task, but there could be hope as on paper, they have the easiest run-in amongst the Champions League hopefuls.

It helps that they play Crystal Palace here, as Roy Hodgson’s men are going through a worrying run of results at the moment, with very little to play for here.

But this is a must-win fixture for the Red Devils, as any further dropped points could see their Champions League dreams go up in smoke. While their counterparts could care little about the result, Hodgson’s men are also on a five-game losing run, and they failed to score in four of these fixtures. Keep note that they had also conceded a total of 12 goals in the process.

By all means, count on the hurting United to deliver a huge and much-needed win this Thursday.

Real Betis favoured for a DNB

Real Betis is not at their best form in the league at the moment, but the dip in form of Deportivo Alaves in the campaign will aid them in closing in on the three points from the clash. The hosts are not so much in danger of the drop too.

Alaves need the three points to stay at the top tier next season. They are close to the edge of the drop zone on the league table with just a four-point cushion. Even a draw will be enough for the visitors, but they will have a tough time finding the points at Betis.

The hosts are unbeaten in their last five meetings in this fixture, and the reverse fixture between them ended in a draw.

Real do not boast a good home advantage as their form does not support that, but their recent results suggest a better performance against a relegation-threatened side is on the cards. With just five losses in their 18 home matches so far in the league, we presume Real have a slight edge in this match.

Alaves have only two wins in their 18 away fixtures. Besides, they are on a five-game losing streak in the division. So, the safest bet for the punters in the clash will be a Draw No Bet for Real Betis with a 1.65 odds price by Betway.

Goals to be on show in Ferrara

Inter have lost only one of their last seven matches post lockdown. They are unbeaten in their last two, and come into this one off the back of a 3-1 home win against Torino last time out.

Injuries have been a major concern for both teams this season. SPAL are doomed for relegation this season and when they host a team in the ilk of Inter Milan from the top part of the table, expect nothing short of a high-scoring affair.

The visitors are unbeaten in their last three outings and have lost only two of their last ten away games across all major competitions.

With their league supremacy and a 49 point lead over SPAL on the standings, Inter are likely to create more chances in the game than their hosts.

Both teams have scored in three of the last five meetings. The reverse fixture saw a 2-1 home win for Inter.

A high-scoring affair is the possibility here, with the tip for Over 2.5 goals with 1.50 odds by Bet9ja the best bet in the encounter for punters.