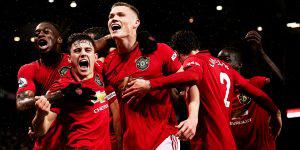 The tail end of the season is nearly upon us, and clubs are looking to end on a strong note. While some are playing for a European football ticket or the cup itself, others are playing to achieve safety, so priorities are different. Either ways, we at Bookmakers Africa have as usual, after extensive research and forecast concluded on these games that can be banked on for Monday by punters.

United to keep up the momentum against Southampton

Manchester United have started to click in the second half of the season, with the signing of Bruno Fernandes fast proving to be a bargain following his awe-inspiring performances. At the moment, their prime target would be to qualify for the Champions League.

The fifth place no longer seem enough for the Champions League, with Pep Guardiola expressing optimism their ban will be lifted.

Considering their incredible form, their intense desire to qualify for the competition, and their impressive h2h record over Southampton, it is expected that the Red devils will overcome in this match.

The Saints were held to a 1-1 draw on the road last time out by Everton, and they have been brilliant since the restart of the season, even beating Manchester City. The form of their star striker Danny Ings will be a concern, though United’s defence have shored up in recent weeks.

United will surely be going after that fourth-place finish, and will attempt to secure all 12 points on offer from their remaining games in the league. They are also on a winning streak which have seen them score three or more goals.

Manchester United have a phenomenal h2h record over the years against this rival, and particularly so at Old Trafford. Moreover, Southampton were winless in four of their preceding six road trips, and of these three were losses.

Considering all these, with United knowing they can overtake Chelsea, back them to come out victorious at full time. A win for them is priced at 1.32 odds by Betway.

Granada will welcome Real Madrid at home when they host Zinedine Zidane and his men in the clash with hope of making it into the Europa League qualifiers.

Real on their part, will look forward to winning in other to strengthen their grip on top spot.

The hosts are unbeaten in their recent three fixtures with one draw recorded therein. Interestingly, both of those victories came in their away games in the league. Their last game was a 2-3 win on the road against Real Sociedad last time out.

Their opposition are on an eight-game winning streak in the league with six clean sheet kept in it. They have been kept a clean sheet for the past five consecutive games in their schedule.

They will visit after a 2-0 win at home against Alaves in their last league match, but Zidane’s troops have found goals hard to come by, and have often scrapped their victories recently. However, they will be confident of taking home all three points from this one.

As already mentioned, Los Blancos have been struggling in their recent away matches, with narrow wins keeping alive their charge.

With such a strong squad including a bench full of options, Zidane will be comfortable in this clash and the home team will have to work against the odds to trouble the log leaders. Back Real Madrid to do the job with a narrow scoreline. The Under 3.5 goals odds is priced at 1.40 by Bet9ja.

Inter to put troubles behind them for a win

Inter Milan will not have to worry over the recent dropped points, as they continue to chase down a Champions League spot for next season.

Torino have nothing to play for, and may not pose much of a threat to the I Nerazurri. Besides, Antonio Conte’s boys have been unbeaten in their last three h2h clashes at home with Torino.

Torino is struggling at the bottom half of the table but are unlikely to be draw into a relegation dogfit as they are seven points far from the edge. With their poor away form, II Toro have a rare chance of toppling the home team in this encounter.

With a poor away form in the league this season, including a losing streak recently, we reckon that Torino will not pose any serious problems for Lukaku and Co. in this one.

The home win in full-time with 1.42 odds on 1xbet will be the best bet in the clash to yield decent returns.